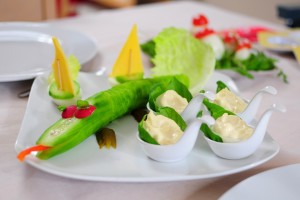 We reported in last week’s post that the fashion industry in New York is suffering due to unseasonably high temperatures, rendering winter clothing less attractive. So what – if anything – is replacing this? What are consumers spending their money on in the Big Apple now?

It seems food is becoming the next best thing, or, at least, it’s trying to be. Food entrepreneurs in Queens are trying to get their organic recipes to become household names. At the Organic Food Incubator (and other such places), gluten free bread, hot sauces, and various tonics are being created and bought to cafeteria’s like those at Facebook’s HQ, located just south of Manhattan.

Indeed, one might even go so far as to say that “food is as hot as tech right now,” which were the words that came from the mouth of Organic Food Incubator’s founder, Richard Madonna. He developed this institute to help food entrepreneurs get their start in the business.

Last year, it was documented in NYC that there was a total of 1,078 food manufacturing companies employing 16,356 workers. This was an increase from figures in 2008 in which there were 940 companies and 14,284 workers.