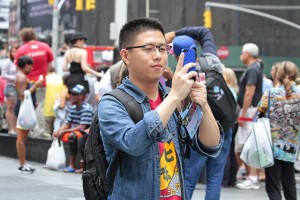 Which is of course great for the economy. Indeed, the Mayor increased NYC spending on tourism promotion last year. He is considering repeating this for 2015. And it seems like it’s working since there was over 2 million additional tourists to the city from 2013 to 2014. Indeed, the amount of tourists has been increasing quite steadily since the petering out of the recession, going above and beyond the goals the city officials are setting. As a result the economy is benefiting too.

The weak US dollar definitely had something to do with this. Brazilian tourists started filling up cases with everyday items. But now that the dollar is coming back, some of the buying power will decrease, so the promotional side of NYC tourists is tapping into places like China. Over 740,000 visitors from China came last year, which is actually close to five times the amount that came in 2009.

Because the economy seems to be improving in general in New York, lots of industries are enjoying the repercussions. For example, there has been somewhat of an escalation in purchasing at US museums. According to Hudson River Museum director Michael Botwinick:

“Donors have recovered their sense of financial well-being. Museum endowments are healthier. Donors and museum directors feel freer with money than they had just a few years back.”

Thus it should not be surprising that a recent Siena College Research Institute poll found that only one out of six CEOs in New York are negative about the economic future.

Stand by: New York is coming back. It’s time to hop on that plane and reap the rewards of the City that never sleeps.