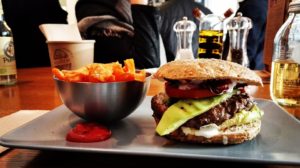 Did the election campaign have any impact on fast food chains?  And if so, was that ultimately positive or negative? Either way these companies have been utilizing the election as a data point to explain the ebbs and flows of their businesses in the last few months.

One example of this has been the perception of Jack in the Box executives.  According to an article from the end of last month written by Conor Dougherty in The New York Times, during the campaigns, they concluded that because of so much uncertainty, consumers became less committed to purchasing their cheeseburgers and Jumbo Jacks.

However, after the election that seemed to change.  Gillian Rich, in an article published just last week in Investors Business Daily pointed out that Trump’s “victory has already helped put restaurant stocks back on the menu.”  She wrote that:

“Shares of Jack in the Box, which was added to IBD’s Leaderboard Thursday,  jumped 2.3% to 102.54 on the stock market today, consolidating in a flat base and nearing its buy point of 102.78.”

And it is anticipated that by next week the firm (which is also the proprietor of Qboda Mexican Eats) will have quarterly results that will increase 42% to 88 cents and revenue up 12.6% to $398.67 million.

In general restaurants in New York find it challenging to succeed. It’s always been a tough market but it seems that now – with, increasing rents, a higher minimum wage along with city hall bureaucracy and Instagram-obsessed customers, according to Hailey Eber in The New York Post, “many of the city’s most talented chefs [are] throw[ing] in the dish towel, and New York’s once vibrant dining scene is turning bland.”

And thus rather than remain in New York, some of the creative talents are leaving for Los Angeles, which seems to have a better reputation – for now – when it comes to survival and success in the restaurant business.