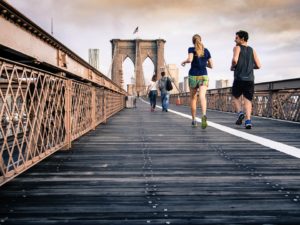 A recent report from SmartAsset showed that those living in a 2 bedroom New York apartment need to make $164,614 per annum.  Median Manhattan rentals are $3,450 and the median cost of buying is $1,315,700.  While that figure has dropped 1.0 percent in the last year it is estimated that it will increase 2.5% within the following year.

So it’s not cheap to live in New York.  However, jobs in the city are generally high paying.  Indeed, according to recent analysis from Ladders, New York has the second highest number of six figure jobs.  As well, companies around the world offer high salaries to people who will work for them and live in New York.

So can someone like 32 year old Alicia Kennedy — a freelancer NYC food blogger — make it in NYC?  Three years ago when she first went freelance (having left a steady copy editor position at New York Magazine), the $5,000 tax bill was quite a surprise.  She’d miscalculated at $3,000.  Anyway this is how she makes it.  She spends:

So Alicia is successfully living in NYC even though she’s far from a six figure salary!