TEFAF leads the way around the world for having some of the most esteemed art fairs today. Now, TEFAF NY will be coming with their inaugural exhibit to TEFAF New York Fall 2016 taking place at the Park Avenue Armory from October 21-26. This event is a collaborative effort between TEFAF and Artvest, an independent advisory firm.

Together, TEFAF and Artvest put together a selective committee to evaluate galleries for submission. The judges include four members of the TEFAF Maastricht Board of Trustees and four independent experts from the United States. They reviewed the many submissions and selected 93 exhibitors to be part of their first show. 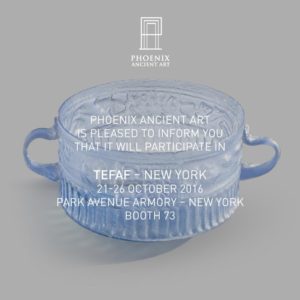 Phoenix Ancient Art and many others.

As an example of the types of items that will be on display, Phoenix Ancient Art plans to bring as part of their display a cameo with four portraits of Philip the Arab and his family. The cameo is from the 3rd Century AD Roman period and Phoenix Ancient Art will include this with many others in its display. They will also have a two-handled cup of cobalt blue glass presented solely in an exhibition case from the work of 1st century AD artist Ennion.

As a true feast for the eyes, Phoenix Ancient Art is recreating the look of the Pantheon in the Park Avenue Armory, including the vaulted dome ceiling and central oculus illumination in their space. Learn more about their plans as described by Art Fix Daily

Certainly, those in the art world are eagerly anticipating TEFAF New York Fall 2016.