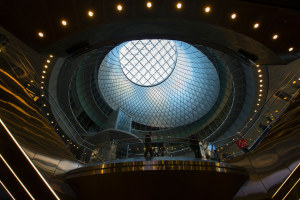 Thomas Prendergast, Chairman of the Metropolitan Transportation Authority, referred to it as “New York’s next great public space.” Centrally located at Broadway and Fulton Street, the building has real presence. Built at a cost of $1.4bn, taking 10 years, the glass-and-steel entrance opens up to a 90-foot skylight. Featuring the nine existing subway lines within 180,000 square feet, it is due to serve 300,000 passengers per day.

The key engineer on the project, Michael Horodniceanu called it “the station of the 21st century.” It is quite a change from the old Fulton stop where passengers were forced to rush through narrow corridors, trying to avoid other passengers, trying just to not get knocked down!

There are 27 entrances into the building – all of which are handicap accessible. There is a 350 foot tunnel that connects the Center to the Santiago Calatrava as well as the PATH commuter New Jersey train.

Culturally, the new station is also impressive since the historic building brings everything full circle, back to the 19th century when the place was actually central to New York City.